This year, Lyles celebrates 40 years since beginning her acclaimed teaching and research career. She is the first woman to receive her PhD in business from the University of Pittsburgh and, today, is professor of international strategic management, Chancellor’s Professor and the OneAmerica Chair in Business Administration at the Kelley School.

During her undergraduate years at Carnegie-Mellon, Lyles recalls telling her advisor she wanted to pursue an MBA.

“He said, ‘Well, you’re getting married. Maybe an MBA isn’t right for you. Why don’t you do something like library science?’”

Lyles laughs at this memory, explaining she completed the library science program. But after earning a Master of Library Science degree, she enrolled in that MBA program. Shortly after, she was invited by a faculty member to pursue her doctorate. She graduated in 1977 with her PhD in business, majoring in strategic decision making and planning and minoring in management information systems.

When she was hired by Indiana University that same year, Lyles was the third female faculty member out of 150 Kelley professors on both campuses.

“I truly believe I have the best job,” said Lyles. “It is more rewarding than you’d ever imagine.”

The school’s first female management professor, Lyles has focused her teaching and research on emerging markets, global strategic management, organizational learning, strategic planning systems and cooperative strategies. She has presented and authored more than 100 papers and chapters on international business and strategic management.

Lyles was among the first US business scholars to focus on China, beginning in the mid-1980s, when she consulted for the US Department of Commerce in Dalian, China. She has centered much of her research around emerging markets, particularly China, over the years.

“As an undergraduate, I traveled in Europe for a summer, and that was it. I knew then that international business interested me,” explained Lyles. “I felt strongly in later years, as a faculty member teaching strategic management to students who were going to work in firms, I needed to know something about international business. At the time, one of the biggest issues U.S. firms were facing was how to move international. So it made a lot of sense to me. At that moment, I was teaching at the University of Illinois, and I was offered in 1984 an invitation to be a visiting faculty member at the top international business school in Europe (European Institute of Business Administration, or INSEAD).”

That began a career spanning decades across the globe, as Lyles set herself apart as an international strategic management expert. 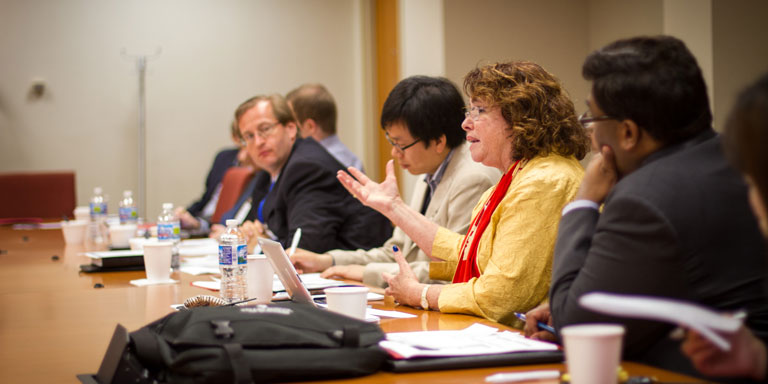 In 2012, Lyles was elected by her peers to be the first female president of the prestigious Strategic Management Society (SMS). She is currently serving a six-year term on the SMS Executive Committee and board, which included two years as incoming president (2013-2014) and two years as president (2015-2016). Lyles will serve as past president through the end of 2018.

“It has been an honor to serve as president of Strategic Management Society,” said Lyles. “As president, I made sure an international agenda was emphasized more than it had been before. SMS is now moving to be more of an international organization. Scholars in other countries beyond Europe and the United States are now looking at SMS as a distinguished professional organization to which they want to belong.”

“We are proud of Marjorie’s leadership in the field of international business strategy and the visibility she has brought to the Kelley School of Business. As a member of the Strategic Management Society, I know the importance of having Marjorie as a role model for the group,” said Idalene “Idie” Kesner, dean of the Kelley School of Business and the Frank P. Popoff Chair of Strategic Management. “She has been a pioneer in international strategy research and teaching. Her expertise on China, and Southeast Asia more broadly, is valued by academics and business practitioners across the globe. We celebrate all that Marjorie has accomplished in the past 40 years.”

For the past two decades, Lyles has led Evening MBA students on business consulting trips to China and emerging economies like Brazil, Russia, Liberia and, this year, South Africa.

“The study trips are opportunities for our Evening MBA students to open their eyes to population segments in almost every country that are often left out of our discussions in the business school,” said Lyles. “The entire experience helps students grow by giving them a chance to be creative and innovative. They learn to think outside the box, and so do I, on these consulting trips.”

Lyles was honored for lifetime achievement in international management in 2015 when she was selected as the PWC Strategy and Eminent Scholar by the International Management Division of the Academy of Management.

In 2013, she was named a Chancellor’s Professor, which is the most notable appointment a faculty member can attain at IUPUI. In 2011, Lyles received the John W. Ryan Award for Distinguished Contributions to International Programs and Studies. She was also nominated for the prestigious Chiang Jiang Scholar Award by Sun Yat-Sen Business School in China, which is the highest award the Chinese government offers to academics.

On March 24, Marjorie Lyles will receive an honorary doctorate from Copenhagen Business School (CBS). It’s a distinguished honor given to only 40 scholars worldwide since 1978. The researchers are nominated by the departments with which they collaborate over the years. Lyles says she has worked with researchers at CBS on several papers and has served as a visiting scholar there, as well.

“It is a tremendous honor to receive an honorary doctorate from Copenhagen Business School,” said Lyles. “Those who have received this honor before me are leaders in the areas of international business and strategy. I look forward to continuing to represent the IU Kelley School of Business on an international level.”

To women in business, and women looking to succeed in business in the future, Lyles recommends keeping your goals in mind – and sticking to them.

“The facts illustrate women are doing quite well in business, but we are still facing a lot of hurdles,” said Lyles. “A lot of that is networking and, simply, biases. You have to figure out how you can succeed in that environment and let some things roll off your back. Keep in mind, you have a lot of attributes that are contributing to your organization’s success. If you are in a place and it becomes too hard, go somewhere else. You just have to make up your mind that it’s important and stick with it. Keep being productive. And enjoy what you’re doing.”

When asked about juggling work as a professor and as a mother, Lyles said she didn’t find it hard to succeed at both.

“I was a single mom a lot of the time,” said Lyles. “I had to rely on other people to help me. When I first moved to Indiana, some of the neighbors whose kids went to school with my son were a big help. We had a little group of working mothers, so we shared obligations. That made it easy as well.”

When thinking back to the times she defied the traditional roles of women as she pursued her career and interests, Lyles says she had always been like that.

“I grew up making a lot of my own decisions,” said Lyles.

“My mother passed away when I was two, and my dad had three girls to support. He worked all the time, kind of like I do now,” Lyles laughed, remembering. “I was used to being independent and making my own decisions. I never was very good at following directions and being told what I should be doing.”

And if she had followed directions back when an advisor advised against getting her MBA, how would she have gotten to where she is today?