Veterans Day is a national holiday dedicated to honoring the men and women who have bravely served in the United States Armed Forces.

Kelley students, alumni, faculty and staff are no exception. We are proud to call many veterans and current service people Kelleys. Below are just a few of their stories:

Wes Wood served in the US Army for five years (2010 – 2015) after completing his undergraduate studies. He entered the Army as an enlisted soldier and spent four of his five years in an infantry sniper section, deploying once to eastern Afghanistan as a sniper team leader and leading the section of three teams for the last two years he served.

Wood earned his MBA at Kelley in 2017, and while directing a workforce program at Conexus, he found he was working with companies who wanted to hire veterans but didn’t know where to find them. That’s when he came up with the idea of “INvets,” a boots-on-the-ground approach to recruiting at military bases around the country.

“I thought we could create an effective veteran recruiting platform if some of these companies combined efforts and resources,” he explained. “Over the course of the last year, Toyota Motor Manufacturing of Indiana, Allison Transmission, Faurecia, Subaru of Indiana Automotive and Honda Manufacturing Indiana all made a two-year commitment to contribute funding and jobs to stand this program up.”

Wood travels to various military bases to share why service members should choose Indiana to start the civilian portion of their careers, based on quality of life and variety of career options. He hopes INvets will be a win-win as a resource for veterans as they make the transition out of the military, while also supplying employers with dependable candidates.

“This is important to me because it helps the state economically, helps my fellow service members get their professional start and provides a precedent for what this model can accomplish,” said Wood. 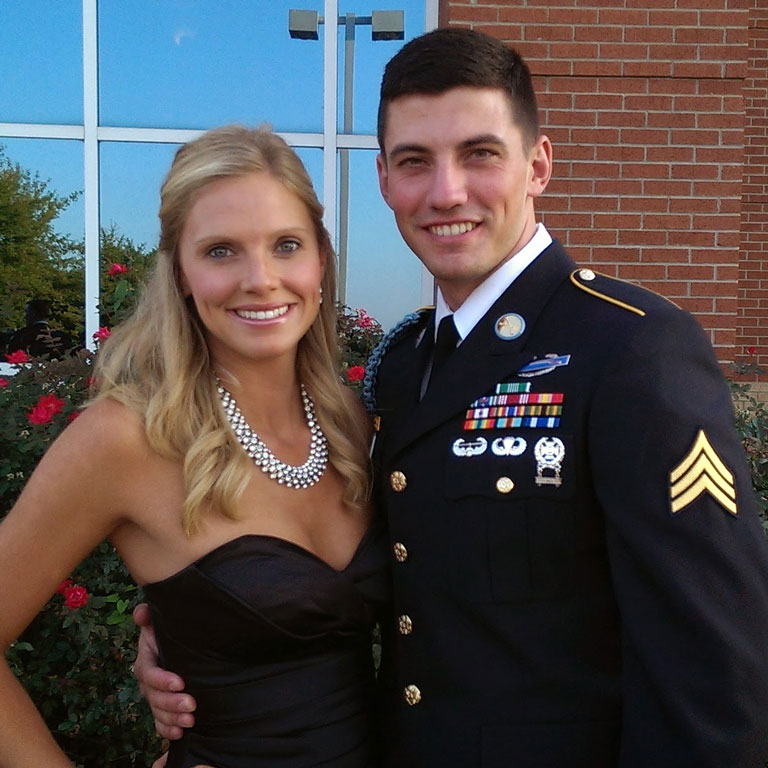 Wood feels his Kelley MBA helps him convey the business case for a company to participate in INvets.

“Many people want to help veterans, but this issue is much more than a social program. It has the ability to positively impact a company’s bottom line,” he said. “The abilities I gained from my MBA to coordinate these efforts have been helpful as I work with community leaders, companies and other nonprofit groups. IUPUI and Kelley staff have been very helpful in meeting with me to give advice as this initiative has unfolded.”

Vets looking for a new career or companies looking to get involved can email Wes at
wwood@conexusindiana.com.

Kaleb Britton, BS’19, knew he wanted to go into the military from a young age.

“My grandpa was a Marine, and I’ve looked up to him my entire life. He’s been a role model for me. After September 11, I knew I wanted to go and serve. It was always a dream of mine,” said Britton. “Before I graduated from high school, I enlisted and went on to serve four years in the infantry.”

Britton was sent on two security missions in the Pacific, conducting training missions with militaries from different countries. After his time in the service, Britton decided he wanted to get his undergraduate degree and has a goal of going to law school.

“Serving in the Marine Corps taught me so much,” he explained. “It really put my future into perspective for me. It made me a better person, and I want to make a difference in the civilian world.”

Britton started his undergraduate degree at Indiana State University, and transferred to IUPUI and the Kelley School of Business in fall of 2016.

He recently was chosen to attend the Leadership Institute for Student Veterans of America in Dallas, Texas. Each year, the highest-performing student veterans in higher education are chosen to travel to the George W. Bush Presidential Center to receive hours of intensive classroom training from business and industry leaders.

“The Leadership Institute for the Student Veterans of America was an absolutely life changing experience,” said Britton. “The primary goal was to get each student to know their ‘why:’ What is the driving factor behind what you want to do in life?”

Britton explained they first spent time volunteering at a non-profit horse ranch, which allows veterans to work with animals to relieve the tensions of PTSD. The group of about 100 student veterans spent the rest of the weekend learning to develop their own leadership skills, including how to implement steps to achieve goals, how to create an action plan for your future, and how to determine how you want to be perceived as a leader.

“We learned many different leadership styles, and along with learning our ‘why,’ they stressed the importance of truly understanding what being a leader means to us, what we are capable of as student veteran leaders, and how big of an impact we can make on the world.

Britton’s advice to other students from his leadership training is – stay open-minded.

“I used to come into situations with a preconceived notion about how it would go, and I think it’s really important to keep those thoughts separate and out of business situations – keep that open mind.”

Reflecting on the weekend, Britton says he came back to campus with a goal – and a plan.

“It was an inspirational event that I believe lifted each of us up to want to achieve great things, and become even more integral parts of our respective communities,” said Britton. “It was the most life-changing experience I’ve had, besides my time serving in the Marine Corps. Coming back to IUPUI, I have a renewed sense of motivation and work ethic. I have an action plan. There’s so much I want to do and that I can improve on as a leader.”

Graciela Macias, is a Kelley undergraduate student serving in the National Guard. She trains one weekend a month and two weeks in the summer, including unit activations.

“I decided to enlist because I felt I hadn’t done enough to contribute to society as a high school graduate,” she said. “I felt that I could do much more for my community, and I could also learn more about leadership.” 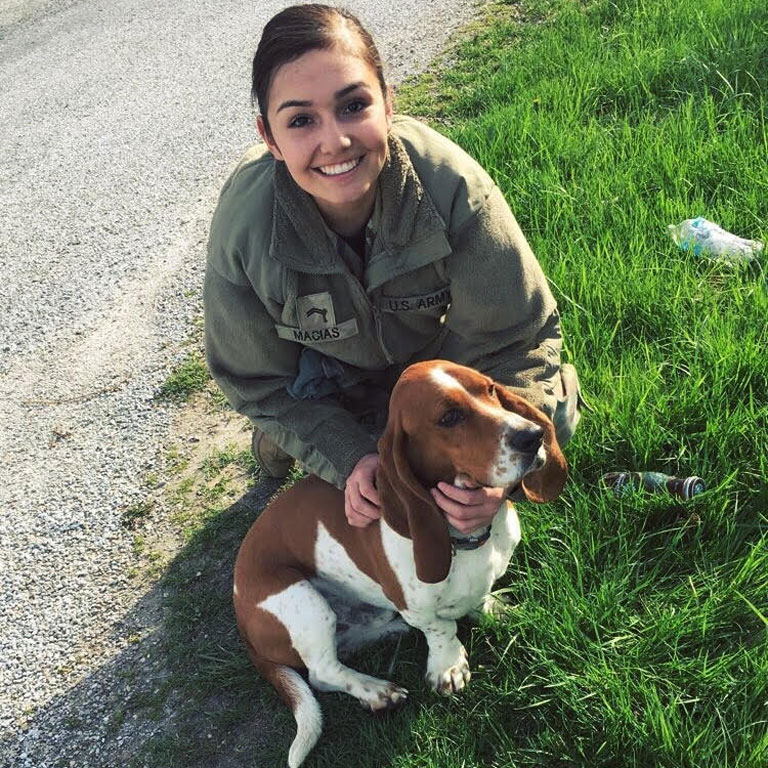 “Graciela leads a supply unit and is wisely pursuing a supply chain degree here at Kelley,” said Judith Wright, clinical assistant professor of business law and one of Macias’s instructors. “She often came to class in her uniform because she works many hours in the Guard. I greatly admired her commitment to excellence in the classroom; a commitment she clearly applies in service to our country as well.”

Macias says the most rewarding part of serving has been gaining a better understanding of her strengths and weaknesses, adding, it helps her accomplish more than she thought possible.

“Enlisting provided me with opportunities I wouldn’t have had if I did not join,” she said. “I’m grateful for the experience and look forward to developing myself as a leader as I fulfill the rest of my time in the military.”

Michael J. Hurley, Kelley senior studying supply chain management, joined the Army in 1985, shortly after turning 18. He went to Infantry school at Ft. Benning, GA, and then straight to Airborne School and the Ft. Bragg NC 82nd Airborne Division. His life changed in more ways than one in North Carolina. “During my time at Ft. Bragg I meet my wife, Sandra, and we had our first son, Andrew,” said Hurley. “Shortly after he was born, I was sent to Korea, where I worked on the border of North Korea in an elite unit called the JSA.” 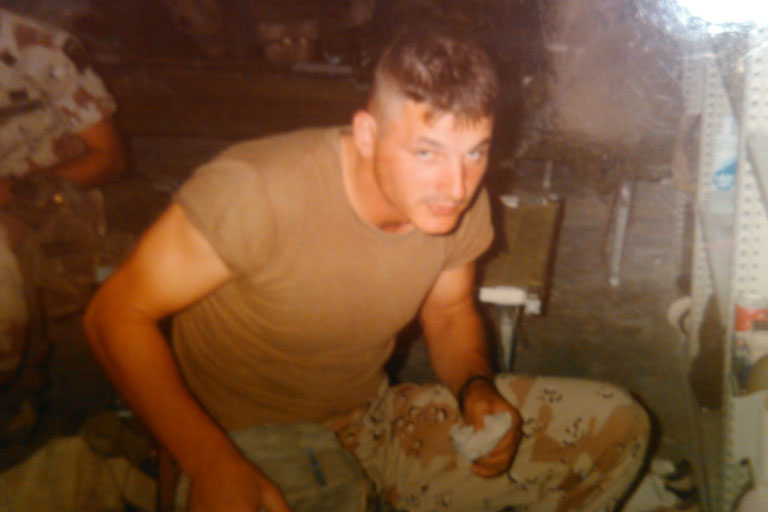 After Korea, Hurley went back to the 82nd but shortly after his return, the first gulf war began. He was deployed to southeast Asia, where he learned from his wife they were expecting their second child.

“Matthew was born two weeks after I returned home,” he said.

The Hurleys stayed at Ft Bragg for about a year before Michael was sent to Alaska, where their youngest son, Johnathan, was born. After three years in Alaska, Hurley was sent to recruiting command. 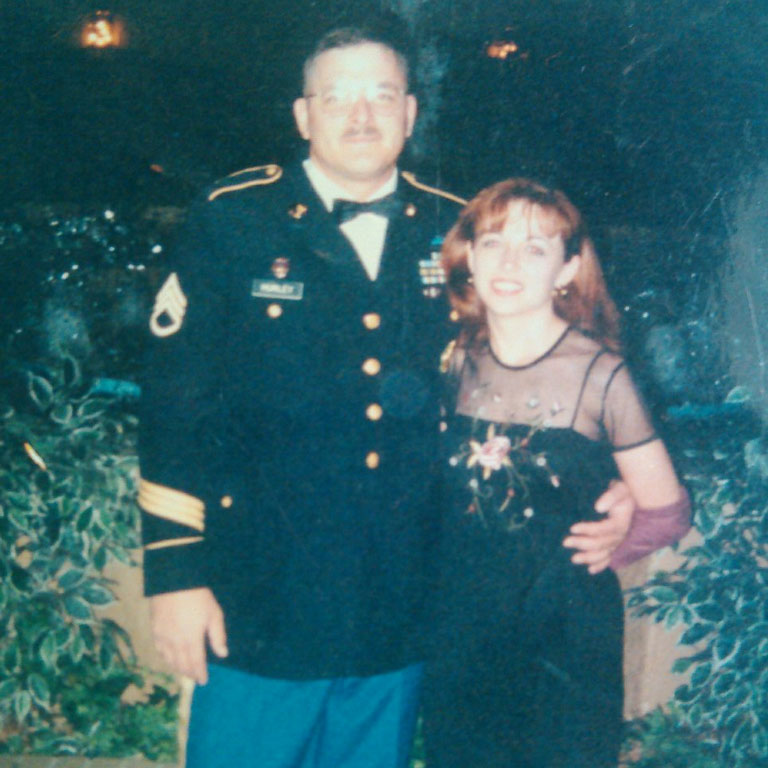 “Recruiting was tough duty and after four years in recruiting, I decided to get out of the Army,” he said. “I am very proud of the time I spent in the Army. I would not trade it for anything, but I am even more proud of my family. My wife is a true hero, and I think that military spouses are the toughest, smartest and bravest people in this country. They face the danger and hardship of military life with a smile taking care of our children and households without complaint.”

That love and support was even more helpful when Hurley decided to back to school at Kelley.

“I was not sure if I could handle it. If not for the encouragement of my family, I do not think that I would have made it,” he said. “On this Veterans Day, as we remember those who served, don’t forget the ones that stand behind them: the mothers, fathers, spouses, sons and daughters. We should thank them all for their sacrifices, too.”