This is the third in a series of blogs featuring the Venture Club, written by Evening MBA student Vicky Bender.

Just two days after Election Day, I attended the Venture Club’s November meeting, optimistically titled “Networking Optimization.” I was still reeling from the election results, and my attempts to discuss it the day prior led to outbursts that I was hoping to avoid in this public venue. Concerned about networking with this topic so raw in the public sphere, I sought out a friend to sit with during lunch, an ironic twist given the topic of the day.

I guess irony was my friend that day because the woman who took the seat to my right was someone I had enjoyed meeting at a previous Venture Club event; a marketer by day, she served as a city councilwoman by night. Politics would be unavoidable, I thought with disdain.

During lunch, I heard the woman to my right discussing the election results with someone else at the table, so I turned to my friend, a German citizen, and asked how he was doing. “I’m not sure,” he said. “I’m still trying to make sense of the election.” Yep, unavoidable. 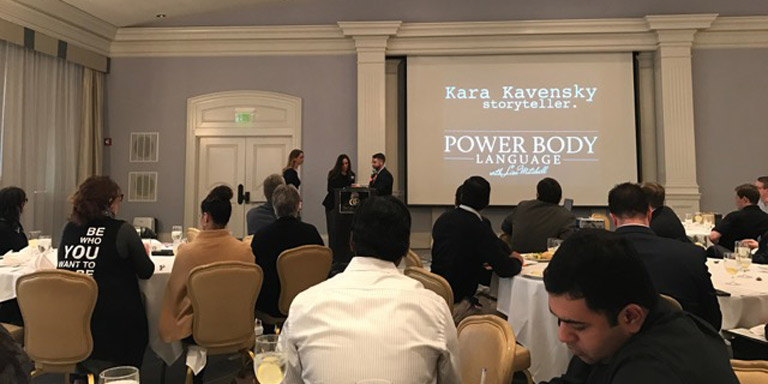 Fortunately, the speakers saved me from too much discussion of the topic. Pitch coach Kara Kavensky and Power Body Language Specialist Lisa Mitchell began their presentation by discussing the prevalence of nonverbal communication in our interactions. Our body language, including things like where our feet point or how our arms are positioned, say more about our interest in the person we are talking to than our words do.

Surprisingly, Kara and Lisa pointed out that when we interact with another person, we instinctively notice the hands first. An evolutionary behavior, we assume that hidden hands (in pockets or behind the back) are concealing a weapon or preparing to do harm. Open and visible hands indicate trust. We discussed, and then practiced, good handshakes with others at our table.

At this very moment on November 11, 2016, while Venture Club members enjoyed lunch and learned about body language and interactions, Donald Trump met with President Obama at the White House. Later that day, a body language expert discussed their interactions in a short segment on CNN. Among the aspects of their meeting that she discussed was the placement and positioning of Mr. Trump’s hands.

Given this President-elect whose words have been so divisive, it will be interesting to be more mindful of his body language in addition to listening to his words. Here’s hoping that he approaches the country and the world with open, visible hands.