Johanna Rohler, MBA’19, had just graduated with a degree in nutrition science and was working as a registered dietitian when she decided to pursue an MBA.

“I’ve always had big dreams; bigger than I am. I came to a point where I knew that if I was going to live any of my dreams, I needed to be well-equipped with the tools to succeed,” she said. “I could see that I didn’t have the skills I needed to bring all of my ideas to life and that I’d need more training to keep up.”

As she began her career in nutrition, it became clear to Johanna that an MBA was the key to her next professional step. Her mentors encouraged her to pursue the degree and Johanna herself noticed the job postings that caught her eye increasingly required an MBA. She felt an MBA would match her interests with the jobs she wanted, and she thought the Kelley School of Business Evening MBA Program was the place to achieve it.

“My passion is to equip and empower others, and lead toward positive impact. I thrive in the big picture—and that requires a solid foundation to succeed,” she said. “I knew I could count on Kelley to open doors and also open my eyes to what I needed to know and skills I needed to develop.”

Johanna chose the program based on its reputation, value and evening hours that allowed her to continue working and implementing the lessons she was learning in the classroom in real time. Plus, as one of the youngest members of her MBA cohort, Johanna knew that gaining valuable real-world experience during the program would be critical to maximizing her experience.

“Another amazing benefit of the program was the relationships I was able to develop with so many Kelley faculty,” she said. Johanna says she received regular and honest feedback and support from several Kelley professors. They not only made advanced business concepts clearly understandable, but she says they also helped her identify her strengths and weaknesses while challenging her to achieve more and develop as a professional.

“My Kelley professors saw ability in me that I didn’t see in myself, and they knew how to help develop those traits. They have always been willing to go the extra mile,” she said. “I gained so much value from the professional development courses with personal attention from the faculty while I was a student, as well as mentorship that has continued even now that I am an alumna.”

“I also learned a lot about being teachable and how to approach life — and business — from a different direction than I ever had before. I’m amazed by all the opportunities that emerged.”

The skills Johanna developed in the Evening MBA have indeed helped her keep pace with her dreams. And she is still dreaming big. Looking back, Johanna can see an arc of her progress – from a challenging first year in a rigorous program that required intense focus, to a year later, professional transformation.

Her transformation was fueled by the realization it was time to start experimenting and taking calculated risks, challenging herself to learn outside her comfort zone and pursue growth over merely success. She decided to create her own learning lab, launching a small business to put to work everything she had been learning in the classroom at Kelley. 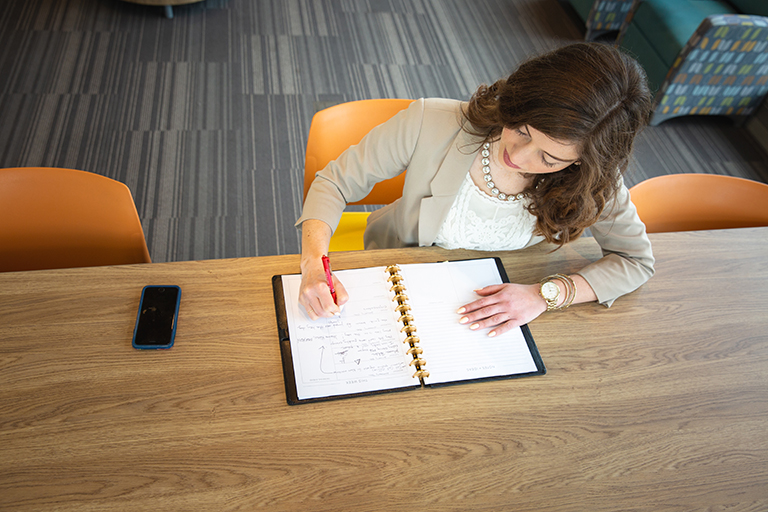 “I had the idea to drop-ship premium coffee beans and decided my strategy would be to pilot a co-marketing concept,” she said. “I featured different charities each week and donated half of the profits that week to the charity. I wanted to be able to support worthy causes I didn’t personally donate to. The concept caught on like wildfire.”

Johanna received overwhelming response from charities wanting to be featured, and people who already followed the charities were excited to support them through coffee purchases.

“The first week in business my sales equaled the start-up costs. In the process, I learned so much,” she said.

Through self-discovery in the Evening MBA program, Johanna realized she had a passion to help lead amazing brands and businesses toward profitability and growth, as well as to be an agent of positive impact.

“Shortly thereafter, I had the opportunity to interview for a marketing role with Heartland Food Products Group—a company who owns Splenda as well as a national coffee brand called Java House. I know one of the reasons Heartland hired me was because of the initiative, creativity, and business acumen demonstrated by my coffee business.”

Johanna had her eye on a brand marketing role for Java House, but she knew she needed more experience for the job. She worked hard and absorbed everything she could in her new role.

“The first three months at Heartland Food Products Group were an important period of learning,” she said. “The excellent training I was receiving at Kelley, along with a teachable attitude, helped me learn and adapt very quickly. That was key in my promotion to the role of associate brand manager for Java House, and then another promotion just a few months later to the Splenda brand management team.”

And it was also key to her move to associate brand manager at the Coca-Cola Company, where she now works in the company’s Minute Maid Business Unit.

“This role is the perfect fit for me because it ties to together my passion for bringing consumers amazing brands, as well as for creating positive impact. Coca-Cola’s purpose is to ‘Refresh the world and make a difference.’ My belief in chasing growth is the same mentality Coca-Cola has built its culture around. We are always seeking to be iterative, challenge the status quo, and approach problem solving through a posture of humility. I feel so privileged to be on an incredible team, helping build some of the best brands in the world and living Coca-Cola’s values every single day.”

Johanna was ultimately selected as a Forbes’s 30 under 30 Fellow. She’s in the role she knew she wanted, and she’s excelling. From the foundational marketing courses to the finance and operations management classes, Johanna says she uses lessons from her Kelley graduate degree every day on the job.

“The Evening MBA Program equips us with the tools to figure out how to swim to the surface during those times when we feel like we’ve been thrown in over our heads. This is critical for working in brand management, as I have big problems to solve and big questions to answer each day. Since I recently pivoted my career, knowing how to figure things out has been key to success,” she said.

“There’s no way you can learn everything you need to know about business in any MBA program, but learning what you don’t know and then being empowered to do something about it is a really powerful thing.”