As an investigative reporter focusing on social services and welfare, Marisa Kwiatkowski’s name lies beneath some of the most hard-hitting headlines throughout The Indianapolis Star and the USA TODAY network.

In a 2015 article detailing what it’s like to write about social services, Kwiatkowski wrote, “There are easier jobs; that’s for sure. But I wanted this one because I believe that people — particularly those who can’t speak for themselves — deserve a voice.”

Her investigations have led to major changes at both the state and national level and have earned her more than 50 awards in her time as a reporter, including Indiana Journalist of the Year. In February 2018, she was honored as one of the Indianapolis Business Journal’s 2018 Forty Under 40. In December 2018, she received the 2019 Louis M. Lyons Award for Conscience and Integrity in Journalism at Harvard.

In February 2019, she accepted an offer to join USA TODAY’s investigative team.

Kwiatkowski has been at the center of several high-profile investigations over the past several years, including a
team investigation of USA Gymnastics, which led to the arrest and later conviction of a former team doctor, the resignation of the organization’s president and board of directors and new legislation addressing sex abuse in Olympic sports.

The USA Gymnastics investigation was the biggest, most intense project of her career thus far, and during that time, she was enrolled in the rigorous Evening MBA Program at the Kelley School of Business.

“As a journalist, I love to learn. I decided to pursue an MBA because it was an opportunity for me to strengthen my business background and expand my knowledge in that area. Throughout my career as a journalist, I’ve covered many different topics,” explained Kwiatkowski. “I have expertise in law, expertise in education and government, politics and social services, but business wasn’t something that I’d ever covered. It was an area where I felt I wanted to grow. So I took the GMAT and applied.”

In 2016, she started the program, held in the evenings on IUPUI’s campus. Kwiatkowski has long kept herself busy beyond her work at The Indianapolis Star and the USA TODAY network, getting involved in several non-profit boards in Indianapolis. She says to pursue her MBA, she needed the commitment of her bosses.

“From August 2016 on, there was nothing I was doing other than work and school. I needed to have their buy-in because of the intensity of the investigation I was working on at the same time,” explained Kwiatkowski. “You never realize how many available hours you have in a day until you keep adding things. I became incredibly good at time management and scheduling out my day.”

Kwiatkowski says one of the most useful things she learned in the program was the time value of money.

“It is extremely helpful in thinking through projects at work or new projects I want to take on. But it makes meetings really frustrating. You’re looking around and thinking: How much money is being wasted in this room right now?!” 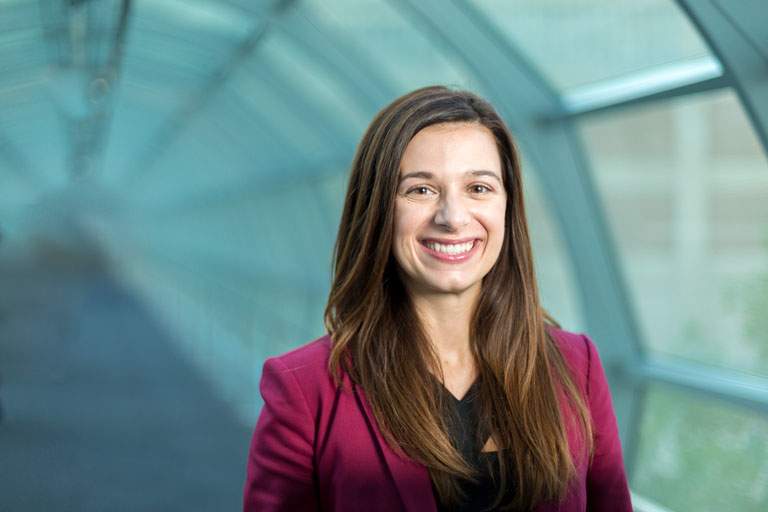 She says the MBA program also gave her additional skills and perspective she can use to analyze information she receives as part of her job as an investigative reporter. Likewise, the skills she brought to the table as a journalist in an MBA program were beneficial as well.

“I don’t come from the engineering background that many of my colleagues in the program did. I brought a very different perspective,” explained Kwiatkowski. “I’m used to interacting with people from all walks of life. My job is to listen, understand and communicate different perspectives and distill complex topics into easy-to-understand language. That came in handy in group settings, particularly with writing-heavy assignments.”

“Marisa exemplifies why our Evening MBA students can – and should – come from every background,” said Ken Wendeln, clinical associate professor of management. “Marisa’s journalism background set her apart in the writing field. I truly enjoyed working with her because she went above and beyond what was required, challenging me as a teacher and career coach. I expect to see great things out of her. I predict she’s going to meet her personal goal to win the Pulitzer.”

“I looked at the Kelley Evening MBA Program as an opportunity for growth, both personally and professionally,” Kwiatkowski added. “It’s another tool in the arsenal, so to speak. I want to continue to expand my horizons.”