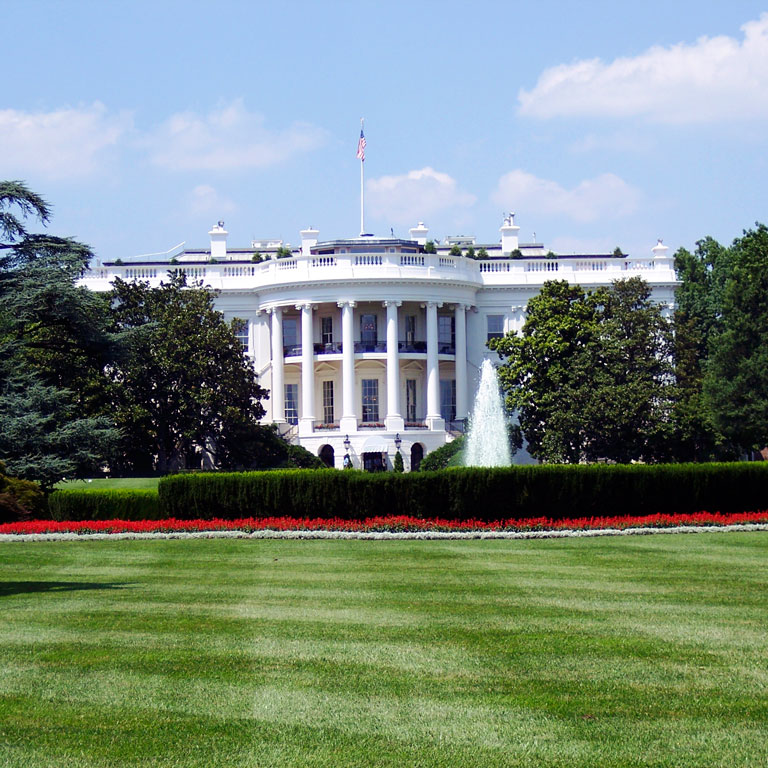 The Kelley Business of Medicine Physician MBA Class of 2017 has convened in Washington, DC for a five-day deep dive into how health policy happens. Twenty-six physicians traveled to our nation’s capital to look under the hood of healthcare policy development.

After flying in from all over the country, the group gathered for dinner at The Hamilton (restaurant not rap-full play), followed by a networking gathering at the POV rooftop terrace of the W Hotel. Watching the sun set over the White House and the Washington Monument made it the perfect venue to discuss the week ahead.

After a 10-minute bus ride, the group arrived on Capitol Hill —full of questions and eager to learn about the process that leads to the policies that guide our everyday practice of medicine. After a short walk by the House and the three buildings housing legislators and their staff, we arrived at the Capitol Hill Club.

We conducted a candid discussion with current and former committee staffers from both the House and Senate. This experienced group imparted what the process of healthcare policy is all about. Discussion during and after the meetings demonstrated the process’s true complexity, which was greatly underestimated by most of us. These meetings also underscored the importance of physicians learning about policy development on Capitol Hill.

One of the true highlights of the day was the tour of the U.S. Capitol Building by the Honorable Cliff Stearns, a senior advisor at APCO Worldwide and former U.S. Representative for Florida’s 6th congressional district (1989-2013). He conveyed the enormity of what happens on the House floor, as we sat in the same chairs occupied by the Supreme Court Justices during the State of the Union. Not going to lie, that was cool. After this history-filled tour of the Capitol, we enjoyed a delicious Italian meal served by a Russian immigrant, rounding off the true greatness that is the melting pot of America. 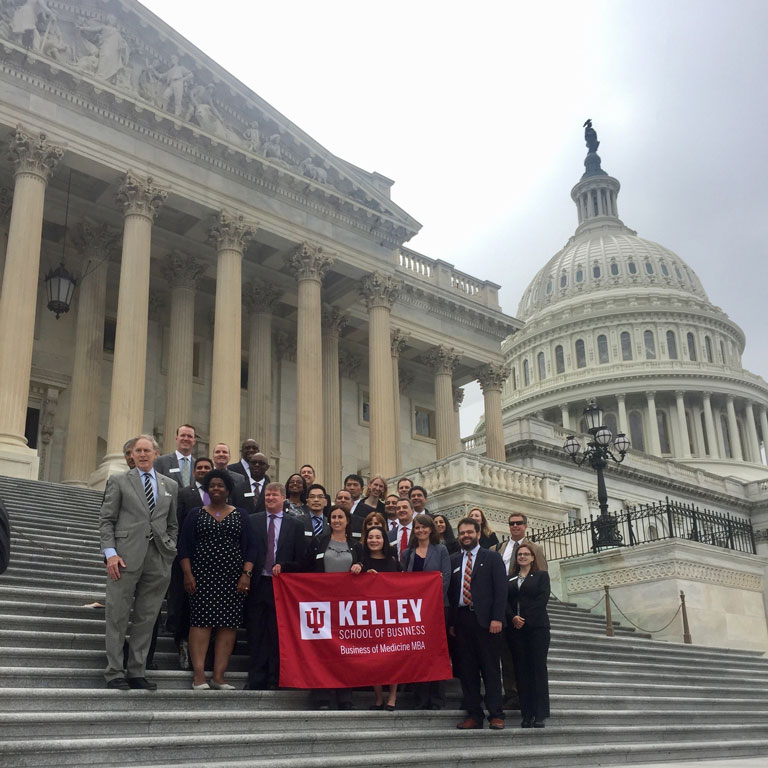 On day three, we walked briefly to The Washington Campus, a non-profit, non-partisan, higher education consortium of business schools and universities.

We were then exposed to an all star lineup of former agency and congressional staffers currently involved in lobbying and policy development. Our morning began with the Honorable Bruce Mehlman, the founding partner of bipartisan lobbying firm in DC, who shared his experiences on Capitol Hill and provided a convincing argument that lobbyists play a critical role in the legislative process.

Jeff Myers, President and CEO of Medicaid Health Plans of America, followed by Doug Holz-Eakin, president of the American Action Forum and former director of the Congressional Budget Office, shared their views of the current healthcare reform. They both discussed the process of this undertaking, agencies involved and possible outcomes of the current efforts.

After lunch, we were introduced to the federal regulatory process by Jonathan Gledhill, President of the Policy Navigation Group.

Gledhill’s experience in the White House Office of Management and Budget introduced us to the regulatory process. He then had the group design regulation for the production of apple juice.

After a short walk in ideal Washington weather, we arrived at the penthouse conference room of Revolution, LLC.

Ron Klain, executive vice president and general counsel discussed his time as the White House Ebola Response Coordinator or “Ebola Czar” under President Obama. This was an enlightening discussion of the organization challenges posed by an epidemic of this nature.

Day three concluded with an evening tour of the majestic monuments of the nation’s capital.

Our fourth day began with short bus ride to the Hill, where we first landed at the Federal Trade Commission.

Rob Canterman, a senior attorney for the healthcare division for the Federal Trade Commission’s Bureau of Competition, reviewed the mission of the FTC and ways the organization accomplishes that mission.

The main role of the FTC is to protect healthcare consumers by assuring that competition is preserved whenever possible. He was kind enough to answer a litany of questions from our class, who must all be concerned that they are violating some laws by the nature of some of the questions asked. Physicians always get a little nervous speaking with a lawyer in a hearing room at the FTC. Incidentally, the FTC security could rival TSA.

It was then a short bus ride to the Congressional Budget Office.

Barry Blom, principal budget analyst in the the projections unit of the CBO, discussed the organization’s ten and thirty year projections for the US economy. This provided each of us with a flashback to macroeconomics. It was very informative and a bit depressing. The financial state of America could be compared to a speeding car heading towards a cliff. At the conclusion of the talk, it became clear why none of the windows on the tenth floor of the CBO opened, it would be a liability. 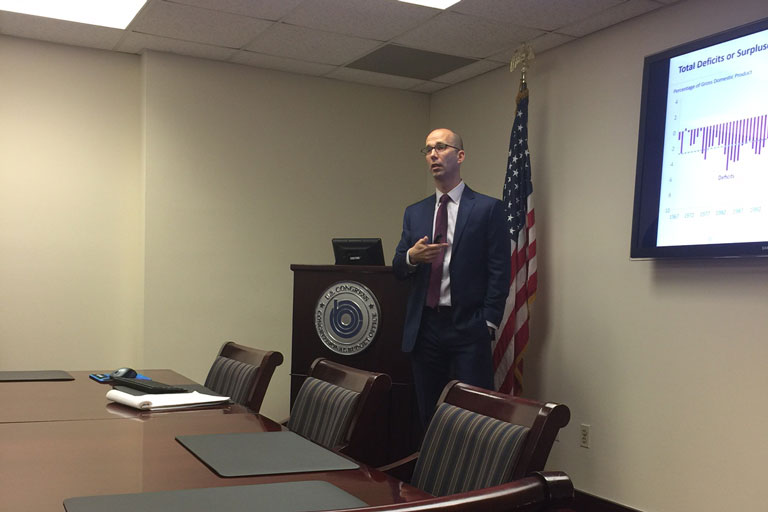 We then returned to The Washington Campus for lunch and a recap and integration session with our course director, Professor Julie Manning Magid. Her insights help to bring clarity to the complex processes that we are learning about.

Next, Peter Slone, Senior VP for Public Affairs for McKesson, then discussed corporate strategy of a Fortune 5 company. His background on the Hill, Medtronics and McKesson combined with the fact that at age 50 he went back to school to get a MBA, provided relevant insight for a group of MDs returning to school to get our MBAs.

Dr. Liz Fowler rounded off an excellent day with a candid discussion of her experience currently as the VP of Global Health Policy for Johnson and Johnson, and previously as special assistant to the President for Healthcare and Economic Policy at the National Economic Council and Chief Health Counsel and Senior Counsel to the Chair to Senate Finance Committee Chairman, Senator Max Baucus (D-MT). She relayed the strategic approach used to get legislature through Congress.

This was a great finish to an excellent day of learning.

The group then wound down at a local seafood restaurant, and celebrated our fellow physician MBA Sandeep Sehgal’s 53rd birthday.

The quote of the day was “No party has a monopoly on good ideas.” Washington might work better if this quote was followed by members on Capitol Hill.

We started off the day with three executives from the American Association of Orthopaedic Surgeons (AAOS).

First, William Schaffer, MD, AAOS Medical Director, discussed the mission and organizational setup of the AAOS, describing how it acts a liaison between its members and the legislative process. He discussed the size and influence the PAC has as a sole entity or as part of a coalition which may agree or disagree with AMA PAC depending on the issue. 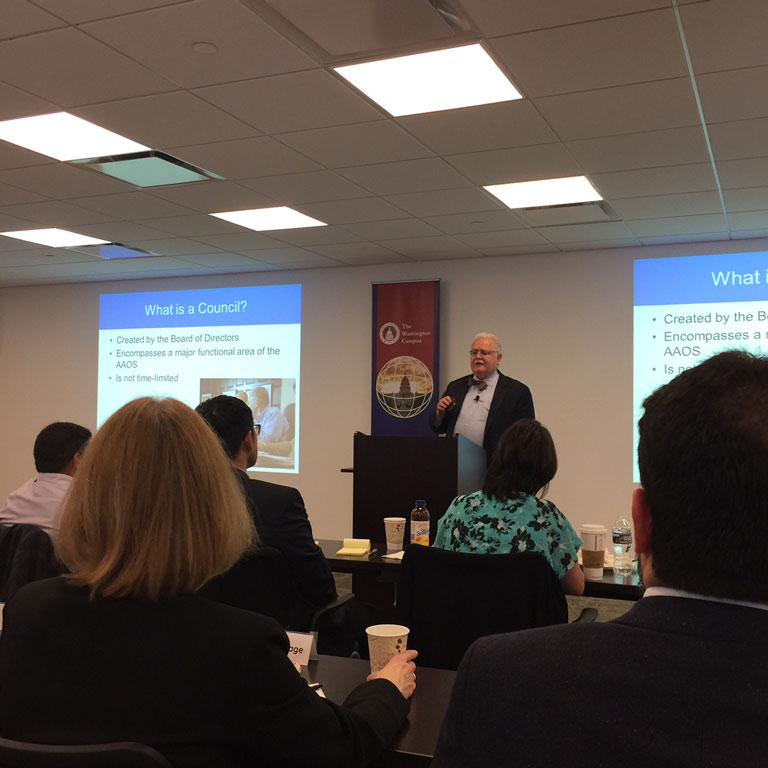 Graham Newson, AAOS Director of Medical and Government Relations, discussed how their employees proactively advocate for the organization’s members. The PAC for the AAOS runs neck and neck with the Anesthesia PAC in size and influence, and both greatly exceed the AMA PAC. Interestingly, but not surprisingly the MEDPAC, a coalition of all medical PACs ranks in the top five PACs, since healthcare now accounts for the significant and fastest growing sector of America’s economy.

Julie Williams, Senior Manager of Government Relations for the AAOS, discussed how the advocacy from the AAOS works, and she also discussed the coalitions it forms with other advocacy groups and trade organizations and their members. She explained the difference between “grassroots” advocacy, which involves all constituents or members of the association as individuals, and “grasstops,” who are advocacy ambassadors or AAOS members who actively engage with staffers and members. These ambassadors contact members at least five times a year, host a fundraiser, donate to PAC and are trained to interact in effective ways with legislators.

Tom Scully, former CMS administrator during the George W. Bush administration and one of the architects of Medicare Part D, weighed in on both ACA and AHCA. He was very cynical about the ability of Congress to get any changes made and very optimistic that things would not change for doctors in the short-term.

John Banghart, Venable’s Senior Director for Technology Risk Management, discussed the importance of cybersecurity in the face of a continued and ever-increasing regulatory environment. He discussed the recent history of incidents and breeches with healthcare information. He reviewed the components of the National Institute of Standards in Technology (NIST). These components include 1) Identify, 2) Protect, 3) Detect, 4) Respond and 5) Recover.

Later, Gary Capistrant, Chief Policy Officer for the American Telemedicine Association, discussed from the Association’s viewpoint, how they proactively monitor legislation to block or change any new legislation that goes against their mission, and to encourage or introduce legislation that supports their mission. Laws affecting reimbursement, licensing, malpractice and interstate commerce are just a few of the legislative issues that impact the telehealth industry. 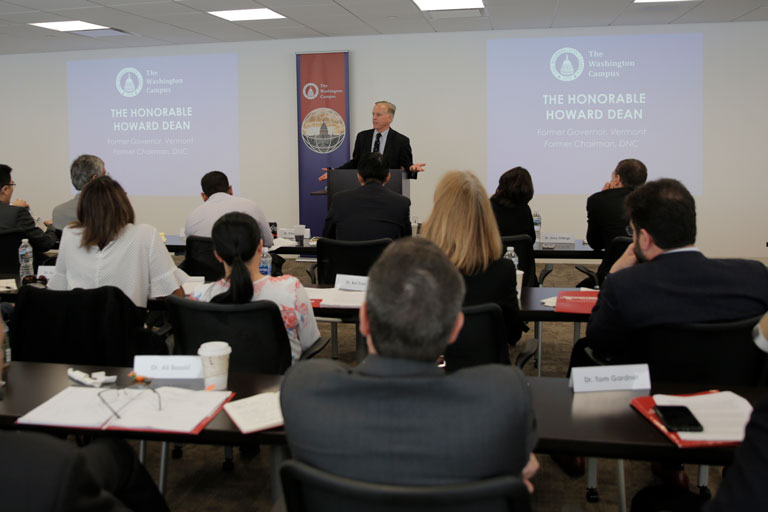 Our group then proceeded to the National Press Club, a historic treat with pictures of many famous events and announcements of American politics.

Rick Klein, the political director of ABC News, shared his first interview experience with President Trump, which occurred before he even entered the campaign. Interestingly, it was at the construction site of Trump’s new hotel on Pennsylvania Avenue, just down the street from his current address. The interview took place under a sign the “TRUMP COMING IN 2016.” Coincidence? Or did Trump do the interview because he knew he was jumping into the race? You decide.

Our last morning started with Sohini Gupta from the Mehlman, Castagnetti, Rosen and Thomas political lobby group. Gupta discussed the role that a registered lobbyist plays in the legislative process.

She described her current efforts in telehealth and several other topics and further explained the way the lobbyist serves as a vehicle from the concerned party to the legislative process.

She focused on the importance of relationships and explained that trust with staffers and members is what moves them to action. Lobbyists’ prior work as staffers allows them to understand what the staffers want and need to inform their members of Congress to help affect change.

Mike Lord, President and Director of the Washington Campus, then integrated the entire experience for us, weaving in the key points and counterpoints of all the experiences of the week. This integration, presentation and discussion provided insight from multiple aspects of healthcare policy reform.

Mike, who received his advanced training in strategy under current IU Kelley School of Business Dean Idalene F. “Idie” Kesner when she was at the UNC, and the rest of the Washington Campus staff, including program coordinator Libbie Gerham, deserve a special thanks and all should be congratulated on providing a great learning experience.

Combining an all-star cast of lecturers from all walks of the legislative process with a group of 26 intelligent, inquisitive and at times even probing physicians made for an extremely enlightening, educational and empowering experience.

The level of engagement and excitement demonstrated by the attendees during lectures, discussions, dinners, bus trip and walks to campus confirmed the true benefit of this course.