Six months ago, I overheard a conversation about University Innovation Fellows, a program that empowers students to become agents of change on their campuses.

It sounded fairly interesting to me, so I decided to apply, despite having no interest in innovation and entrepreneurship at the time. Little did I know, this decision would later become the best investment I’ve ever made for myself, as well as the start of a life-changing journey.

My name is Mike Huang, and I am a 21-year-old, fourth-year undergraduate student at the Kelley School of Business on IUPUI’s campus, majoring in management, human resource management and international studies.

I am passionate about diversity and inclusion, front-end development (UI/UX development) and talent acquisition. I am a member of Team NitroDunk, the winning team at the first IUPUI Sports Innovation Institute – 24 Hour Innovation Challenge pitch competition, and 2nd place team at the Jagstart Student Pitch Competition.

After completing six weeks of design thinking training and conducting in-depth analyses of our campus ecosystems, I was officially named an University Innovation Fellow in February 2017, along with two other bright students from the fields of science and art & design. Representing IUPUI, we attended the national meetup from March 9th to 13th at the innovation capital of the world – Silicon Valley.

Our journey started with an exciting day at Googleplex, the headquarters of Google, all led by Dr. Frederik Pferdt, the chief innovation evangelist at Google.

We kicked off the day with several high spirit team-building activities, and afterwards, we engaged in Moonshot Thinking sessions. Each team of five took on a global scale problem existing in current universities, ideated radical solutions to those problems, and built tangible prototypes for testing.

We had a hands-on experience on rapid prototyping, using mobile prototyping cart filled with inexpensive materials such as markers, nonwoven fabrics, Popsicle sticks, balloons, yarn and Legos. Prototyping is the core of the design thinking approach to problem solving. It tests how a user interacts with your design, and it helps to gather feedback and allow you to understand the strengths and weaknesses of your ideas.

My team’s idea was to redesign campus tours by taking the guests on an adventure with interactive scavenger hunts, so we built a prototype of an entire college campus using Legos blocks and post-it notes and ran a scavenger hunt tour with it.

We also had the opportunity to explore Google Garage, a collaborative makerspace where Googlers across the company can come together and learn, create and make. 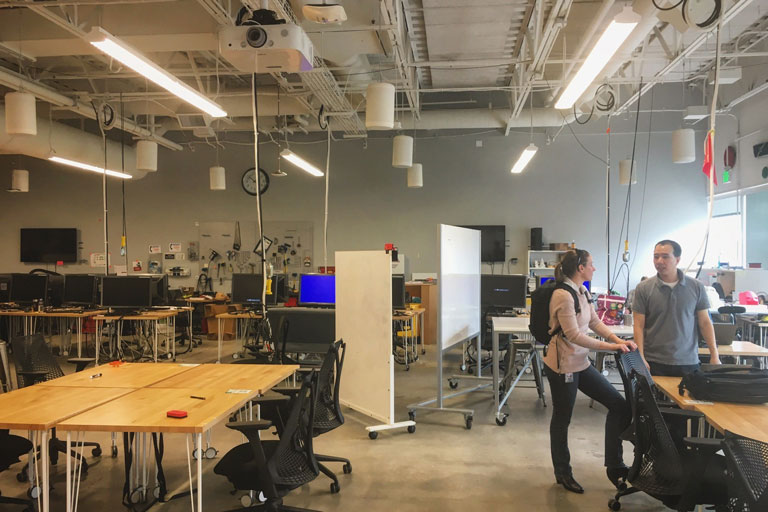 In the afternoon, we had the great opportunity to hear from Google’s People Operations team (otherwise known as HR in other companies). We learned how Google designed a culture of creation that continuously fosters personal growth, integrates inclusion and encourages leadership. Better problem-solving skills and increased creativity is positively associated with a variety of diversity attributes, hence Google has been working to integrate inclusive design into their services and products with The Play team, Project Lambda…etc.

The day ended with a panel discussion on the global expansion of the University Innovation Fellow Program in partnership with Google in India. During dinner, we engaged in a deep discussion over the topic “How might we overcome bureaucracy and implement sustainable, scalable changes?”

Spending a day at the most prestigious tech company in the world was truly an eye-opening experience. My biggest takeaway of the day was learning that all of us, 200+ fellows, are here for a reason. It was neither luck nor coincidence, but merely the passion to lead, to serve and to make a difference.

Perhaps the most rewarding day of all, we spent at
Hasso Plattner Institute of Design at Stanford, also known as the d. school.

There, we participated in experiential workshops and exercises focused on topics including movement building, innovation spaces, design of learning experiences and new models for change in higher education.

My first time at Stanford University, I immediately fell in love with the college at first sight. Magnificent historical architectures, artistic sculptures and statues are all scattered on a stunningly beautiful piece of land.

After entering the d. school, I was even more fascinated by the distinct differences between the interior and the exterior of the building. In contrast to the historical view on the outside, the interior design of the d. school was modern, innovative, and extremely flexible. From movable furniture, workable wall surfaces to collaborative makerspaces, the space was tailored to inspire creative potential. 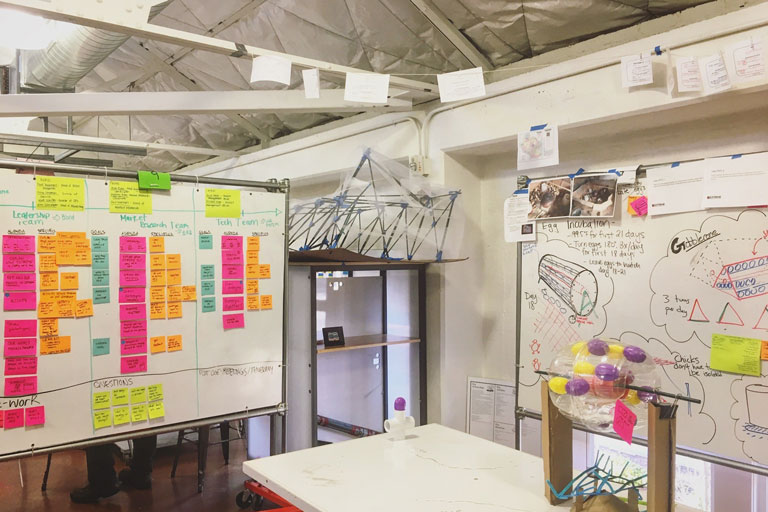 The focus of the day was “Re-imagining Learning.”

We explored different studios full of student projects, prototypes and post-it notes full of ideas and went through various workshops.

My personal favorite was the body movement/dance session, where we learned to let go of our inhibitions and embrace the presence of each other. It was an opportunity for us to truly connect, physically and mentally. As a group, we came together in ways that we never would have without physical contact and learned ways to foster that contact in a positive and constructive way. I hope to bring these positive connections back to IUPUI to help establish trust and foster stronger relationships between student bodies. I will never forget the powerful and emotional speech the instructor gave us at the end, “Make a difference, we are the future.”

In the afternoon, we had the privilege to hear from a panel of world-renowned professors, innovators and entrepreneurs, including Dr. Steve Blank, who is regarded as one of the 30 most influential people in tech and “The Master of Innovation.”

Afterwards, we broke up into different sessions to brainstorm and exchange ideas on how might we structure a design-thinking workshop best for our campus’s ecosystem.

It was great to learn all these new perspectives that I probably would’ve never thought of, and to hear all the brilliant things other fellows are currently doing at their schools.

It was an exhausting but rewarding day.

I’ve learned so many different types of activities that we can do to tap into creativity and form relationships within a team, and I also came up with some great ideas on engaging the IUPUI community in innovation and entrepreneurship. 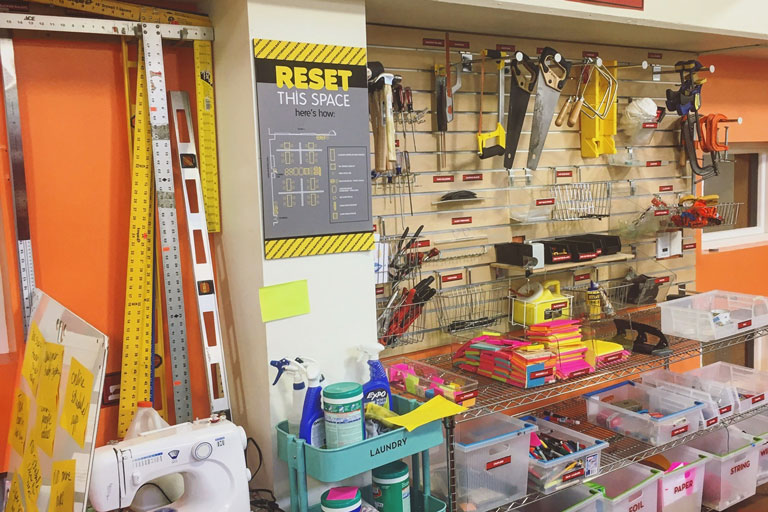 Our day began at another prominent tech company, Microsoft.

We heard from several keynote speakers from the company and learned about the Microsoft Garage, a program that enables employees to work on projects that often have no relation to their primary function within the company. That allows employees to use creativity to craft and build things that could potentially benefit the company in an unconventional way. Interestingly, the Microsoft Garage’s official motto is “Do epic s–t,” which is also extremely identical to the UIF program’s motto!

We were also introduced to a new concept called Unconference, a participant-driven meeting.

There are no fixed topics, no keynotes or agendas: The attendees decide what topics will be discussed and they convene individual breakout sessions.

We had such a blast coming up with topics that we had over 50 of them!

There were some fantastic topics such as, “How might we convince our universities that students are their greatest asset?” or “How might we effectively engage students from all majors after creating a makerspace on campus?” 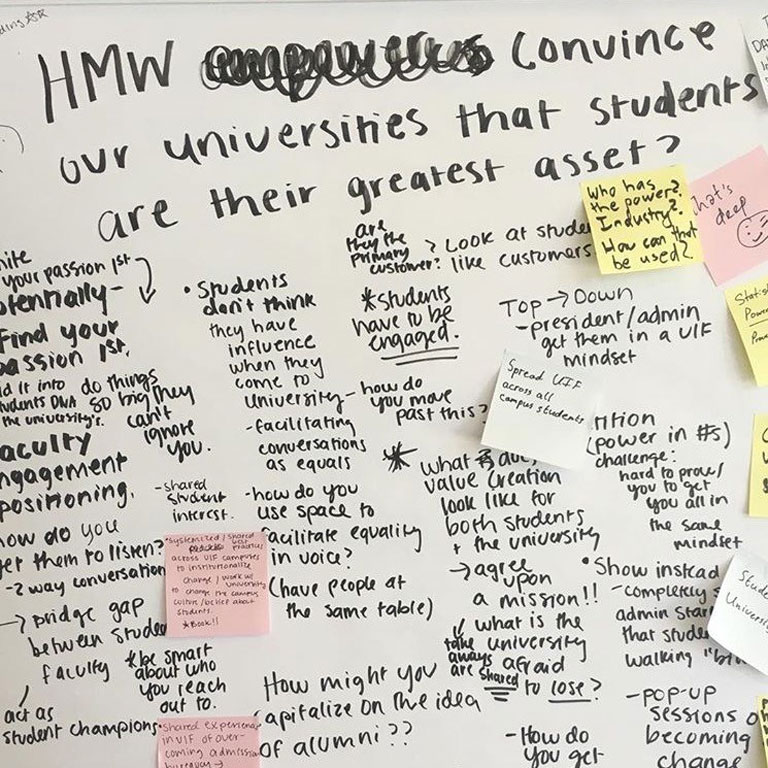 After Microsoft, we went back to the d. school for our final design sprint session. This time, the IUPUI team got together and created a concrete plan and list of actions we will be implementing upon return.

1. Create a mobile makerspace that welcomes students from all majors to come together to exchange ideas freely and build prototypes.

2. Introduce the concepts of design thinking and lean startups to the stakeholders/administrative team by leading interactive workshops and applying those concepts to existing problems.

If I can go back in time and tell my freshman self that, “Students can change the world,” my freshman self would probably think this person is definitely out of his mind, because I never believed that we are powerful enough to make changes.

Yet here I am trying to change the campus culture and be the pilot of our ecosystem, with the support of my phenomenal teammates.

The objective of this trip was to bring the mindset of Silicon Valley back to our campus, but it also taught me that we are more than capable of mapping our own future.

The meetup ended on Monday morning after meeting with the faculties from “Design for Extreme Affordability,” a multidisciplinary project-based course at Stanford that creates an enabling environment in which students learn to design products and services that will change the lives of the world’s poorest citizens. Students work directly with course partners on real world problems: the culmination of which is actual implementation and real change.

After the meetup ended, I continued to stay in Palo Alto and moved into Startup Embassy, the oldest entrepreneurial residence in Palo Alto.

It was a complete blast meeting like-minded entrepreneurs from literally all over the world.

During my 4-day stay, I met entrepreneurs from Turkey, Brazil, Venezuela, Austria, Belarus and Spain. It was a blessing to join such a community of entrepreneurs that I can always share my startup ideas with and challenge each other to get things done. The house also provided an amazing space for collaborating, living and socializing.

Frankly, I did not experience the real Silicon Valley way of life until the meetup ended; I would even say the most rewarding part of my trip actually started after the meetup.

I had the privilege to meet with Dr. Barry Katz at IDEO, a world-renowned professor, author and pioneer of Silicon Valley design to talk about our effort on advocating cross-departmental and cross-institutional partnerships. I met an entrepreneur at the coffee shop that successfully raised over $500,000 for his venture, and the person who sat beside me at my first networking event was a social entrepreneur that used to be involved in several social movements in East Africa. I even met a fellow Hoosier and an extremely talented coder who dropped out of school and moved to Silicon Valley to chase his dream immediately after his freshman year at Purdue.

Above all, the best moment of my trip was definitely meeting Steve Wozniak, co-founder of Apple, in person at a computer science speaker event at Stanford. I did not notice him at first because he was there as an audience member, but I went straight into fan mode after recognizing him. I was so shocked that I completely forgot to ask a picture with him! (I did take a picture of him, though.)

Every encounter and every conversation not only inspired my inner entrepreneurial spirits, but also taught me to have the courage to follow your heart and intuition that somehow already know what you truly want to become.

Silicon Valley is the capital for dream chasers from all over the world; there is no 9 to 5, but only passion and hustling 24/7 to make your dream come true. No matter if you’re 20 or 50, the only things that matter are what you want to accomplish and how are you going to accomplish it.

Everyone has the potential to succeed or change the world and better humanity, a perfect example of meritocracy.

Silicon Valley is not a place, but a state of mind.

“Silicon Valley is what’s inside of you – the mindset that allows you to change the world.” 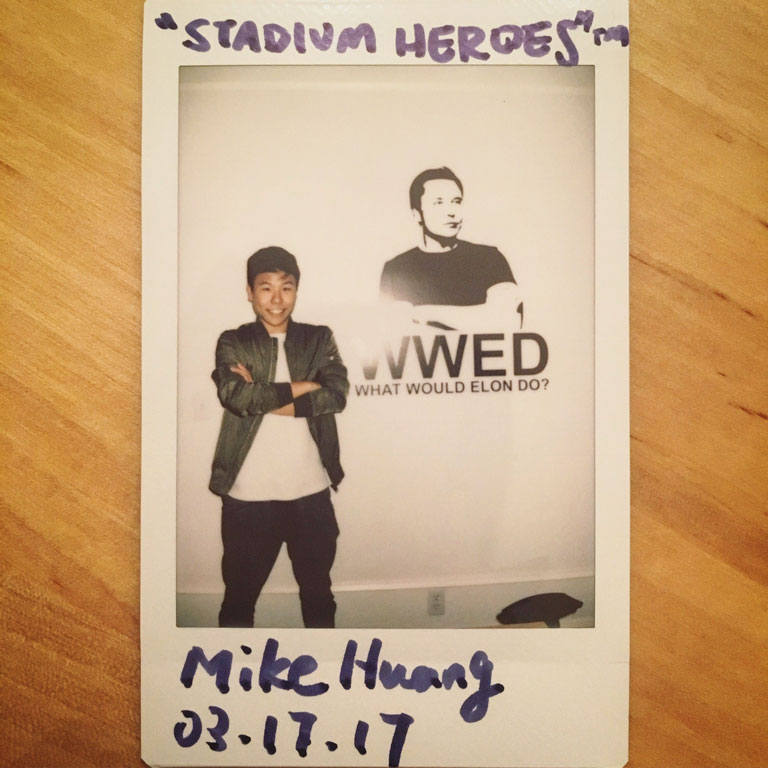