It started before they ever left the United States.

Long before boarding a plane for Germany and Switzerland, undergraduate students enrolled in a Kelley Indianapolis study abroad course learned about the culture and economy of Switzerland from the Honorary Swiss Consul to Indianapolis, expatriation from two Eli Lilly & Company professionals, and German culture and language from an IUPUI professor of German—all of which will enhance their skills in the global economy.

Malatestinic’s main goals for the study abroad course were twofold: 1) to have students learn about employment practices in Germany and Switzerland and compare them to those in the United States, and 2) to understand the challenges of preparing U.S. workers for expatriate assignments.

“I was delighted with the effort put forth by all the companies we visited. They were so welcoming,” said Malatestinic. “It was a wonderful mix of learning class content while interacting with people from many different cultures. We also wove in tourism, which is another important part of understanding a country’s culture.”

One highlight was visiting the huge multinational software company SAP at their headquarters in Walldorf, Germany. The company is well-known for its diversity programs.

“The company has a Diversity Task Force, and task force members hosted us with what they called a ‘cultures breakfast,’” said Malatestinic. “SAP employees made food from their own cultures especially for our students.”

Students also learned about the company’s various programs to employ workers from special populations, such as individuals with autism and refugees.

“SAP had so much prepared for us,” said Jake Gale, a Kelley junior who is studying marketing, supply chain management, and international studies. “From the cultural breakfast to learning about SAP’s diversity approach and their Autism at Work program, we learned so much about their HR practices.”

“I think the biggest takeaway for me is that there are many different ways to approach an issue or come up with a solution, but there isn’t necessarily a wrong way,” added Gale. “For example, our education system is very different from those in Switzerland or Germany. In the U.S., we encourage students to go to college where they learn theory before applying it through internships. However, in the countries we visited, apprenticeships right out of high school are prestigious. Students learn theory as they are practicing it rather than going to college first. Both are different ways of higher education, but they work in the respective countries.”

Students learned about these apprenticeships at Deutsche Bank in Frankfurt by hearing from the director of the bank’s program, as well as from three young men who are participating in different facets of the program. They also traveled to the University of Mannheim, where a professor discussed his research concerning the implications of the aging workforce in Europe. Other visits included Porsche and Roche, where the students learned more about expatriation and relocating employees.

“The entire trip was fascinating, especially learning about expatriates and just how expensive sending an employee overseas is,” said Gale. “We learned that it involves not only covering salary and standard of living changes, but also children’s educations, cultural training, tax assistance, and assistance with homes and transportation.”

“Study abroad experiences like this one open up your world. You see the differences, but you also see a lot of similarities,” said Malatestinic.

The entire experience for students ended with a Kelley moment – on the top of a mountain.

“On the last day of the trip we visited Mt. Pilatus as an excursion. There was something about being at the top of the mountain and reflecting on the entire trip. As I looked around, I noticed how much I got to know everyone on the trip, including faculty advisers. Seeing everyone become so close and being able to discover everyone’s passions and backgrounds made me truly proud I am a student at Kelley Indianapolis. It’s more than just a program. We’re a family that works together to excel,” said Gale. 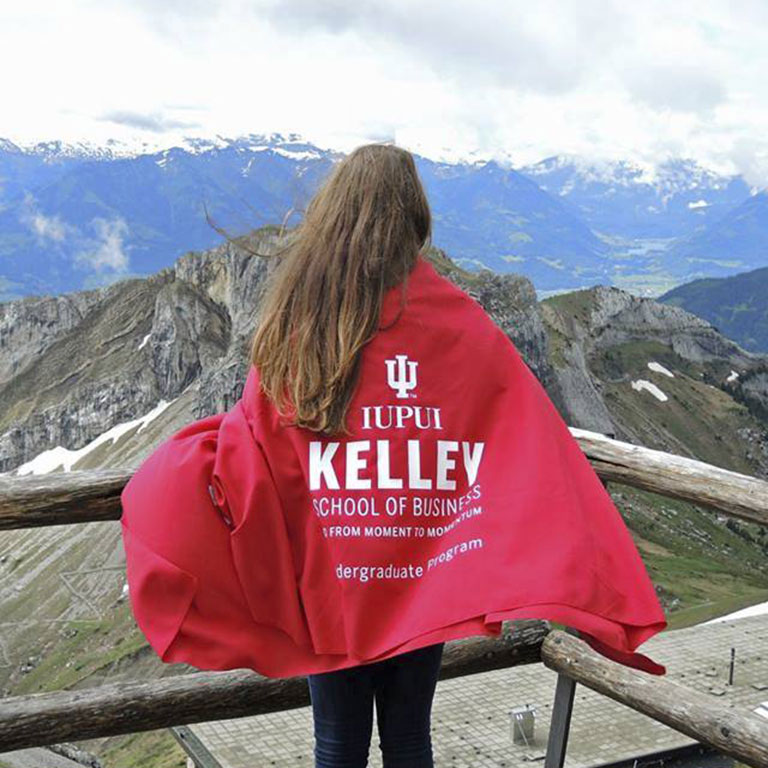