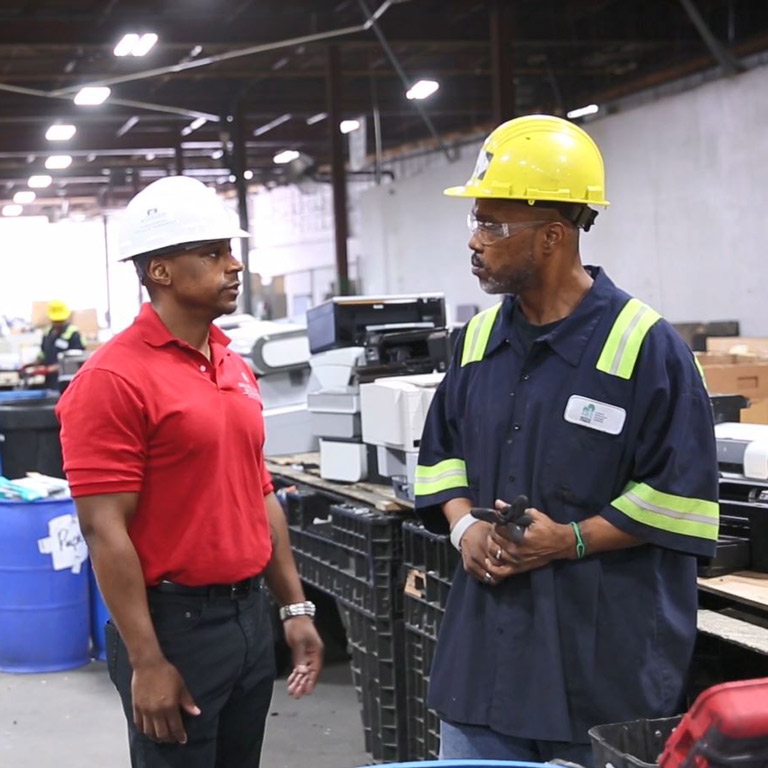 INDIANAPOLIS – Not all research is done in a lab. For one IU Kelley School of Business professor, it happens in a local not-for-profit organization.

Christopher O.L.H. Porter, professor of management and Kelley Venture Fellow, is studying RecycleForce, an Indianapolis organization that offers recycling services while employing formerly incarcerated people, in the hopes of helping them re-enter society.

Porter says it was several years ago when he, new to Indianapolis, stopped by RecycleForce to recycle a TV. He got to talking with the owner and was intrigued.

“Organizations like RecycleForce help keep people out of prison, not only by providing a transitional job, but also by changing the way people think about work,” said Porter, whose research interests include leadership, organizational behavior and team dynamics.

“Some of these guys said, ‘I never want to work. I never want to be one of those people going to a job.’ For them to be at a point where they can embrace a job and understand that’s what they have to do, while seeing the benefits of working, I think that’s a big deal.”

Their goal is to identify a fine-grain model to show what the re-employment process could look like for ex-offenders working to successfully re-enter society, to help them avoid recidivism.

The team interviewed 80 employees at RecycleForce: 65 temporary employees and 15 who’ve been hired full time. In addition to lengthy interviews, the researchers conducted an employee survey and collected data about employee history, demographics and risk factors.

The employees were mostly men, about 40 years old. On average, they each had 2.5 jobs on their résumés. For many, RecycleForce was the first legitimate job they’d had.

“The research will give us a better understanding of the process these folks experience as they come out of incarceration and try to do the right things so they don’t go back to prison,” added Porter.

“As organizational scholars, we don’t even think about this population, and I think we’ve missed an important segment of employees and potential employees, simply because so many people have felony convictions,” he said. “Whether or not an individual has actually been incarcerated, a felony conviction has implications for hiring. We’ve learned through our research that a felony conviction can change the tenor of a job interview just like that. It’s almost like a switch just flips.”

“One of the more interesting things we learned is what happens in the interview when the felony conviction comes up– that moment when the interviewer’s attitudes toward an ex-offender seem to change. The interviewer might become more dismissive or rush through the rest of the interview,” said Porter.

So, Porter wondered, what does this mean for the average employer? Are there conversations with recruiters about the appropriate way to handle a candidate who has a felony conviction?

“Managers aren’t specifically trained on how to conduct an interview or how to maintain a certain level of dignity and respect toward someone who reveals a felony conviction. Ex-offenders are sensitive to talking about their pasts and how they’ll be viewed; they want a second chance. The average recruiting manager doesn’t necessarily think about that or receive the training to manage it. Ex-offender employees have a specific set of needs that are unique,” added Porter.

“What makes RecycleForce most successful is that they understand the challenges this population is facing,” Porter said. “I’m hoping we can come up with several important practical applications. For example, what might an effective transitional job look like? What if you were a major retailer; could you create jobs that were specifically transitional jobs that would allow a bit of flexibility for someone who was transitioning back into society?”

And it’s not only about employment as ex-offenders try to assimilate back into society. Many people don’t have stable living conditions.

“How many jobs offer counseling for this? There are a lot of things we can help managers understand about the unique set of circumstances ex-offenders deal with and what opportunities managers could build into the job to help these folks.”

Another unique detail that came from the research team’s interviews is how ex-offenders look at their prior infractions, and how they believe hiring managers will see them based on what they were arrested for.

“Theft and robberies are perceived as the absolute worst crimes that one can commit as it relates to re-employment,” said Porter.

In future research, Porter says the research team would like to see if there is any legitimacy to this idea that certain types of offenders would be less likely to find jobs than others.

“These folks are really working on seeing themselves differently, and trying to project a different image to other people,” said Porter. “A lot of them tend to be fairly pessimistic about the opportunities they’re going to get for a second chance.”