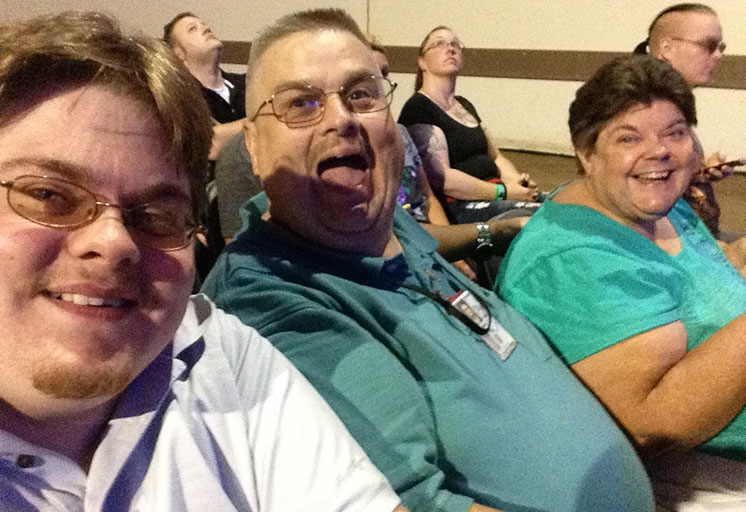 Sharon Lutz won’t be there in person on Sunday. But she’ll be there in spirit as her husband walks across the commencement stage in her place. They started together, and they’ll end together—as a family.

Sharon and Bryan Lutz’ journey together toward business management degrees started as a challenge from Bryan, Sharon’s now 27-year-old son. Bryan was taking online classes at Ivy Tech, working fulltime, and wasn’t sure he wanted to continue.

“My mom encouraged me to stay in school, and I said, ‘What keeps you from finishing your degree, Mom?’” explained Bryan.

56-year-old Sharon had started her degree after she was married to her husband Terry in 1981, but “like everything else in a newly married couple’s life, life got in the way,” explains Terry. Decades later, their son’s words motivated Sharon to start again.

“She said there wasn’t anything keeping her from going back to school, and actually, she wanted to go back. So we decided to make a go of this together,” Bryan said.

The challenge was on for this mom and son duo. The mission? To both earn a degree—and to do it together.

Sharon immediately joined Bryan at Ivy Tech. After completing their business associate degrees there, they began classes in pursuit of bachelor’s degrees at IUPUI in the Kelley School of Business Indianapolis.

“I think it was a motivator for each other to keep them going,” said Terry. “They rose to the challenge, and it didn’t stop. First, it was who got better grades, then who made the Dean’s List and whose GPA was better.”

“A friendly competition, so to speak,” said Bryan with a smile in his voice. “We were in the same classes together all the way through the Kelley School. We were built-in study buddies.”

As Sharon and Bryan worked through school, Terry worked full time to help the family financially. The experience helped them grow together as a family.

“You’ve gotta work together as a team,” said Terry. “This brought our family closer together.

“I’m so proud of their accomplishments. I’m extremely proud they were able to work together, and they met the goals they set for each other. I just want to walk around and thump my chest, saying ‘My family, they graduated!’” said Terry.
“It’s hard to describe, seeing my mom grow with me through this journey,” said Bryan. “It’s such a fulfillment. I’m so proud.”

Walking across the commencement stage is a moment they’ve all been looking forward to for some time. But a few days ago, they weren’t confident that moment would be realized. Sharon and Bryan both were sent to the hospital following a serious car accident in Indianapolis.

Bryan was released the day of the accident, having received bruising and cuts. His mom’s injuries, however, were much more serious. Sharon broke her ankle, received severe lacerations on the top of her head, had bruising in her eyes, and needed additional care.

This week, Bryan and Terry have spent their days at the hospital, making sure Sharon is alright. And she will be, although she’ll need intensive physical therapy in the weeks ahead. But she won’t be able to attend IUPUI’s graduate ceremonies with her son this weekend. Knowing how hard she worked, Terry was determined to ensure his wife’s dream was realized on that stage.

He will accept Sharon’s diploma on Sunday.

“Sharon and Bryan have worked so hard to make this milestone in their lives happen,” said Terry. “I’m humbled to be allowed to walk across the stage in Sharon’s place, even though I don’t personally feel deserving. They, and their classmates, have done all the hard work.”

“I’m proud to be part of the Kelley family,” said Bryan. “I’m proud I am able to do this, to be given the opportunity to do this. I am so proud of my mom. We can show people out there: This is what we’ve done. And hopefully, inspire other people to do the same thing.”

After all that has happened to the Lutz family, Terry now is thinking about returning to school, and Bryan is considering a master’s degree. It appears the sky is the limit.

“I know we can do it, if we just work together,” Terry added with pride.