The Kelley School of Business Indianapolis has created accountants, marketers, managers, entrepreneurs and c-suite executives. But maybe the proudest achievement for some Kelley Indianapolis alum came from what they least expected: love.

Below, there are four stories of Kelley couples, proving some people take more than a great education from the Kelley School of Business Indianapolis.

Antra and Eric Henson: As told by Antra

Eric and I met during the fall semester of 2013. I was starting the Master of Science in Accounting (MSA) Program, and Eric was finishing his Masters of Science in Taxation (MST).

We had state and local tax class together and Eric was the graduate assistant in one of my classes.

Throughout the semester, Eric and I engaged in small debates. But one evening, I walked into class wearing a nice red dress and he was blown away.

Following that day, he took a strong interest in me. On the last day of class, Professor Bob Jamison, who was retiring, threw a small retirement party at a local pizza restaurant. I hadn’t planned on attending, but Eric asked if I was going, so I went.

Eric made sure to sit by me. We talked the whole time and later exchanged numbers. The kicker was Eric hates, and can’t even stand the smell of pizza, but he knew this was his last chance to make a move. And as they say “the rest is history.” We recently got married in Hawaii!

Maria and Josh Moes: As told by Maria

Josh and I met at the Kelley School of Business Indianapolis our sophomore year. Our relationship started growing because we were both part of the same I-Core classes. Because we recognized each other from Delta Sigma Pi, we decided to sit next to each other. Little did we know, those seats were going to be assigned to us for the remainder of the course. Because of this, we spent nine hours of the day, twice a week for a semester, sitting next to each other. It wasn’t long before we started studying together for I-Core and hanging out more and more. Once the semester was over, we began dating that summer and continued our journey through Kelley. We decided to take our capstone courses together, and having someone embark on that journey with you definitely helped.

We got engaged the following summer. We also decided to drag out our college careers another year so we could walk together at graduation. Our wedding was the weekend after graduation, May 16, 2015. Having someone go through college with me, and share all those memories, shows me that it was the right decision to do my undergraduate work at Kelley Indy. We made lifetime relationships with our colleagues and professors, which made for such an amazing experience.

We’re still going strong and have begun planning our dream job, which is to own a winery on the West Coast! 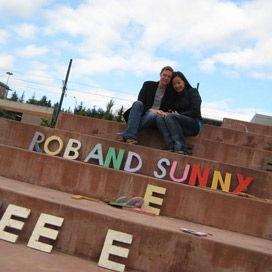 Rob and I first met in Professor Phil Powell’s, now Associate Dean Powell, macroeconomics class. Rob first caught my attention in a spirited in-class debate. He was never the first one to speak or the most frequent responder, but when he spoke, he was spot-on and closed the argument. I respected him and thought of him as one of the most intelligent of my peers. Later, Rob joined my workgroup in macro and I discovered his strategic plan.

I broke up with my previous workgroup in order to join Sunny’s group. I took Phil Powell’s macro paper very seriously and basically predicted the fall of the housing market. (Jokes)

Sunny: Actually, the group found it very challenging to work with Rob and we almost threw him out of the group because he was adamant about his factors and the interdependencies. Finally through long, but well-defined arguments, the group agreed with Rob. We ended up getting an A.

Sunny: Obviously, that’s not where the story ends. But we were full-time working, evening MBA students, so there wasn’t a lot of downtime. In fact, there wasn’t any downtime. Also, I had a rule not to date classmates.

Rob: I respected that rule and waited patiently. We reconnected after graduation and the rest is history.

Today we both work in healthcare IT defining new models of care and interoperability. 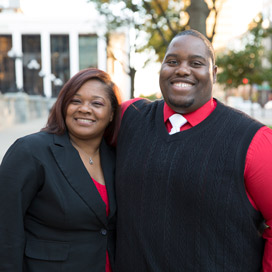 One of the most beautiful and memorable moments about relationships is how two individuals meet and eventually spend a lifetime together. Relationships have, and can be spawn from, any time and place in life, and that makes each relationship special.

For Joann and I, we met on post at the Defense Finance and Accounting Service facility at Fort Benjamin Harrison/ Emmett J. Bean Center. This is where our relationship started, but it has flourished since being students at Kelley Indianapolis. When we met, I was already a student at Kelley Indianapolis pursuing my Masters of Taxation degree.

As I matriculated through the program, I inspired my queen to apply and attend Kelley Indianapolis for her Masters of Science in Accounting. Surprisingly enough, we are both pursuing our MSAs together. Fighting the good fight, not only for love, but knowledge as well. It is always an amazing thing to find love, but what is more amazing is to find someone who can match your aptitude in life.